Shotts and Dykehead Caledonia wrapped up the 2013 pipe band season at the Cowal Championships in Dunoon on Saturday, 31 August

The 2013 Cowal Championships was quite significant to the pipe band world. This year marked the last time the Cowal Championship would be designated a major by the RSPBA after a century of major championship status. Many bands competed in Dunoon for the last time, and it was a fitting way to end the season. For Grade 1, the final major championship of the year would be a medley contest. In much drier weather than the championship previous, Shotts and Dykehead Caledonia drew its number one medley for the last time this year, and finished up with 6th place overall. Shotts’ Drum Major Iona Burns also finished in the prize list, finishing in 5th place overall. The band celebrated the end to a special season by parading down the street in Dunoon to give the contest a friendly farewell.

For Shotts and Dykehead, the Cowal Championship was significant for other reasons as well. Firstly, it marked the end to the first season under new Pipe Major Ryan Canning. Cowal was a nice bookend to the year which allowed the band to reflect on just how far it had come since the winter, with new music, new leadership, new membership, and more. It was also an opportunity to say thank you to the many people who had come together to make the season a success. For the Shotts band, there are a number of special people behind the scenes who give their all to support the band week in and week out. These people make sure the band has food, water, transportation, gazebos, and support, and the help extends from tuning drones to carrying pipe cases to running to check the times in final tuning. With the help of Shotts piper Andy Hall, band members pitched in to organise a thank you gift for each of the people in the Shotts family who make the band what it is. Presentations were made to Ryan, Jim, and Glenn for their leadership, as well as to Sandy Bell, Ewan McAllister, Maureen Gilmour, and Jim Bruce. Not present but equally a part of the band’s support team, thank you gifts were also arranged for Neil Anderson, Bobby Dunsmore, and Malcolm and Margaret McMillan. Thank you to all of our supporters behind the scenes- we couldn’t do it without you! 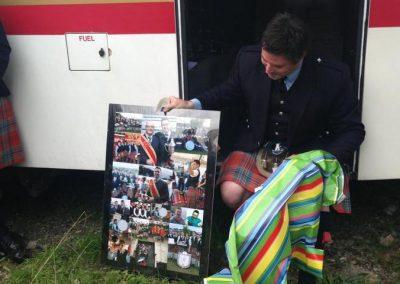 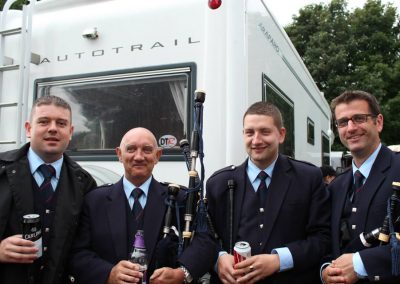 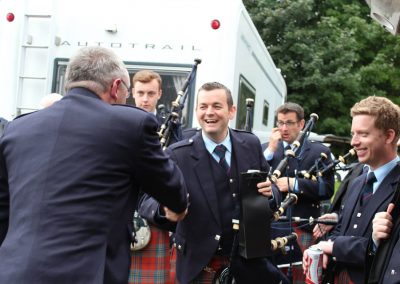 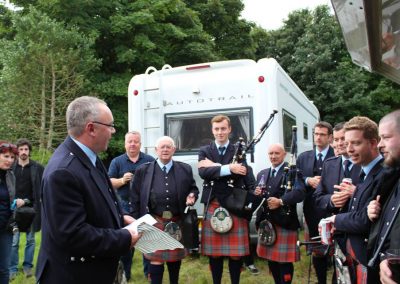 The occasion was also a chance to thank departing members for their service. In particular, the band said a special thank you to Scott Currie for his many years of service to the band’s bass section. In Scott’s time with Shotts, he has amassed over 40 major drum corps titles and 4 World Pipe Band Championships, and has acted as both a bass and tenor drummer over his nearly two decades. To say thank you, the drum corps put together a special presentation to show appreciation for all that he has given over two decades.

As the season officially comes to a close, Shotts and Dykehead Caledonia would like to thank everyone who supported us throughout the season. It was a big year for the band, and we appreciated the support of our friends and fellow competitors. Thank you.