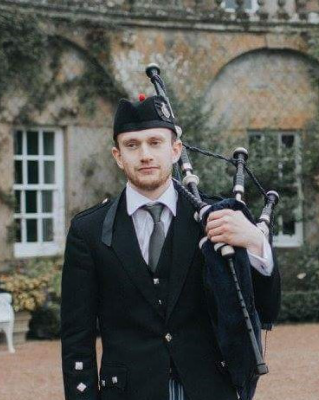 Iain joined Shotts in 2014 and is originally from Strathaven in South Lanarkshire. Having recently graduated from the University of Strathclyde with a degree in Computer Science, he now lives and works in Glasgow as a Software Engineer. Iain has been Pipe Major of the National Youth Pipe Band of Scotland Senior Band since 2017 (a role he now shares with fellow Shotts piper Andrew Clark), having previously served as Pipe Major of its Development Band for a number of years and being a member of the band since 2008. Iain was a familiar face on the junior solo scene, having won a number of top prizes in the under 18s category including the Northern Meeting and the Cowal Highland Gathering, and was overall champion at the Scotts Guards Junior Piping Competition. He hopes to get back into the solo scene and compete in adult competition eventually!