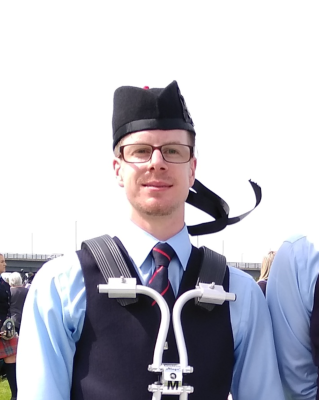 Fraser started out aged 12 with his local Lanark and District pipe band alongside his father and brother. He joined Torphichen and Bathgate in 2005 and was an integral part of the band which secured two world drumming titles in Grade 2 before moving to Grade 1. Fraser was also a past member of the National Youth Pipe Band of Scotland, the highlight being a five-second cameo appearance in an Irn Bru TV commercial. As work commitments took him to the Far East, Fraser took a hiatus from drumming before heading to New Zealand to play with the Canterbury Caledonian Society under lead drummer James Laughlin. Currently living and working in Beijing as a news editor, Fraser looks forward to once again playing alongside his wee ‘bigger’ brother with Shotts through the summer.