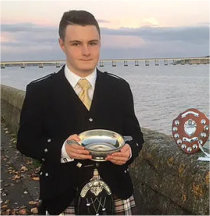 Bobby started learning the chanter in 2013 at Muirhead (Chryston) Boys Brigade hall with instruction being supplied by Elizabeth Rice (BEM). Here he gained the basics and within one year, he progressed to the pipes, playing his first pipe band 'gig' in 2014.

In 2015, he progressed to competing in solo competitions where, under the tutorage of Willie Morrison, he honed his craft and gained some success. Bobby also became a member of North Lanarkshire Schools and started to learn his band craft under Pipe Major Ross Cowan.

In 2016, he continued to achieve success in his solos and won the Worlds Pipe Band Championship in Novice Juvenile.

In 2017, whilst continuing to grow on the solo scene, Bobby joined Isle of Islay Pipe Band where he gained experience in Grade 2.

2018 saw Bobby setting himself a huge challenge to move forward in both his solo and band career and he managed to win 34 first places in his solo efforts. To compound this success, he joined Shotts, kicking off his Grade 1 career.

In 2019, Bobby managed to top his number of solo wins by clocking up 60 first places. He continued to gain experience at Shotts.

2020 was a strange year with Covid stopping all pipe band competitions but Bobby used this break to enter numerous online solo competitions with great success.

2021 again was a non event from a pipe band point of view but by the end of this year, Bobby was back at band practices in Shotts whilst starting full time studying at the Royal Conservatoire Scotland.