Shotts and Dykehead Caledonia has finally gained access to the first official video recording from the recent Reinvented concert, held at the Aberdeen Music Hall on Saturday, 2 May, and hosted by Bucksburn and District Pipe Band as the latest offering from their annual spring concert series in the North East of Scotland. In a recap of the night, we invite you to read about the evening, browse some of the official photographs, and to watch the first recording to which we have access, as we wait for more to come.

This Aberdeen concert was a joint offering, featuring Shotts and Dykehead Caledonia as the guest band, with Bucksburn and District Pipe Band returning to the concert stage as hosts and opening act in both halves. Both the Grade 2 and Novice Juvenile Band performed, with contributions from a backing band, and a final combined set with all bands playing together in a rendition of The Mist Covered Mountains. No doubt the largely North Eastern crowd would have enjoyed hearing their own local Bucksburn on stage, including first time performances from some very tiny pipers in the Novice band!

The first half from Shotts and Dykehead Caledonia was pure pipe bands, saving the backing for the second half, and opening with a set of Ryan Canning hornpipes which you can hear above; the first entitled From Abbotsinch to Aldergrove, composed jointly by Ryan and friend Donald MacPhee, and the second The Salute to the MacLawsontyres, composed by Ryan in honour of the marriage of friends Andrew Lawson (Shotts drummer) and Kirsty Lawson (nee MacIntyre, and former Shotts piper). This opening set was followed by the band’s classic Highland Wedding MSR set, which then led into a slow air/waltz/reel/hornpipe set featuring a new slow air entitled The Siskiyou Trail by Ryan, a Ryan Canning arrangement of The Lark in the Morning in waltz and then reel time, and closing with the technically demanding driving hornpipe, Mrs Sarah Moan, from Northern Irish composer Kenny Moan.Tag team solos were then led from some of the band’s rising stars- Sarah Muir, Andrew Clark, Andrew Bova and Iain Crawford- to huge appreciation from the audience and also from the band, who were able to listen to the talents of their fellow band members, some for the first time. For the traditionalists in the room, a set of melodic ¾ marches were played next which included two classic compositions by John McLellan of Dunoon, as well as one of Ryan’s own compositions Iain Macalister Hall, and lastly the band’s popular Blockbuster medley from the 2013/2014 competition season.

The second half was an opportunity to push the music further: opening with the band’s new medley for 2015, beginning with a brand new 4/4 march, The Octagon. This was the first occasion for the band to air its new medley in public, and those curious will need to wait a further couple of weeks until the band’s first medley competition to hear it again! The next set was a waltz and hornpipe set, opening with the great J. Scott Skinner waltz, Hector the Hero, performed in solo by Pipe Sergeant Glenn Brown, then joined by the full pipe corps, before moving into an original ¾ hornpipe entitled The 42nd Parallel, before finishing on the melodic Miss Megan Harrington, both two more Ryan Canning compositions. The strong melodic tunes were accompanied here by Scottish acoustic guitarist Ron Jappy, a familiar face on the Scottish traditional music scene, as well as Shotts’ own Steven Nelson and David Henderson on djembe and cajon, with Shotts drummer David Mark adding to the set on keyboards, and Shotts piper Dan Nevans on bass guitar.

The penultimate set was a mix of old and new, a march/hornpipe/reel set, opening with Tommy Muirhead’s Carradale Bay in its classic 2/4 march form, before bridging into a round hornpipe arrangement of the tune by Ryan, then bridging into a modern Ryan Canning arrangement of the classic Peter MacLeod reel Arnish Light. The pipe corps then cut out as two pipers, Fraser MacKinnon and James Gill, continued to play Gordon Duncan’s Clueless in duet, before the band rejoined with Philip Greer’s Big Week (composed by Ryan, and inspired by Philip’s own tune The Big Week), and ending with a round arrangement of Bessie MacIntyre which the band used to close its number one medley over the past two seasons.

Lastly, the band finished up its sets with a huge 8 minute set, beginning with the The Siege of Dubrovnik. This Ryan Canning composition is now well known as the opener of the band’s number one medley for the past two seasons, however this version was a slower, melancholy and deeply moving version of the tune played by Andrew Bova on whistle and Ailis Sutherland on solo bagpipes, with a screen in the background showing war images and video of the real siege in the Croatian world heritage site of Dubrovnik, which inspired the tune. The set then went into the march version, with the whole band joining in, and moved into a huge set of jigs including Carnage Drive (Ryan Canning), Coppermill Studio (Michael Grey), The Riddler (Ryan Canning), The Boys of Ballymote (Trad.) and a jig arrangement of Monymusk (Trad. Arr. Ryan Canning). This final set was a build-up which included involvement from the whole band, along with accompanying guitarist Ron Jappy, and the band’s own members David Henderson, Steven Nelson, Andrew Bova, David Mark, and Dan Nevans playing djembe, cajon, whistle, keyboards, and bass guitar.

Overall, the concert was an enormous undertaking for the band as it aimed to bring new music as well as creative arrangements from the classic pipe band repertoire to the concert stage, for the very first time under this leadership. The band utilised the talent from within, featuring soloists from the pipe corps embedded in many of its sets as well as showcased in tag-team format, and drawing on the talents of many of its pipers and percussionists to perform on instruments not of their primary discipline. As it evident from the descriptions above, most of the music was written or arranged by Ryan on the piping front, but it’s critically important to note the huge amount of new drum scores from Jim Kilpatrick. Because the drum corps is such an important and winning feature of the band, the tremendous skills of this corps featured strongly throughout the concert sets, hopefully to the enjoyment of drummers in the audience.

The band is grateful to all those who attended and hopefully enjoyed themselves, and especially to our courteous hosts, Bucksburn and District Pipe Band (and particularly to Gus McAskill), for their planning and support, and of course for the “session” which transpired in the hotel bar between the bands, post-concert! Thank you. 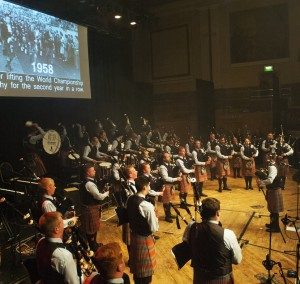 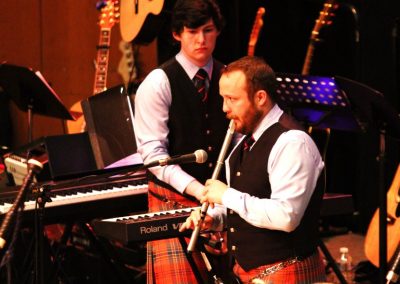 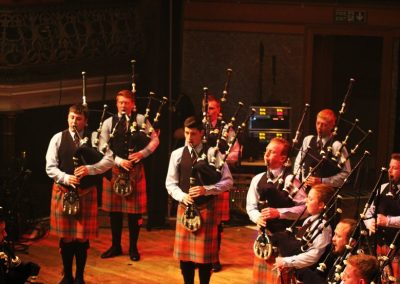 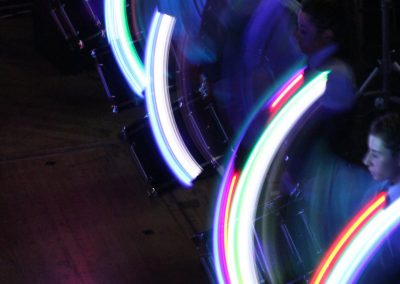 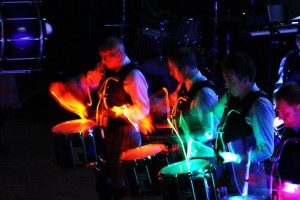 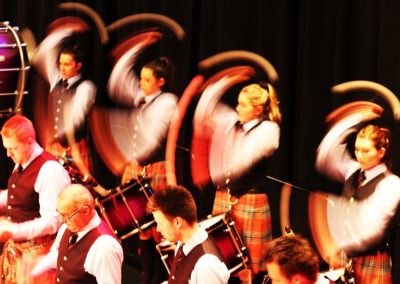 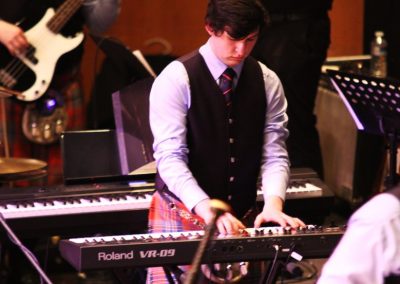 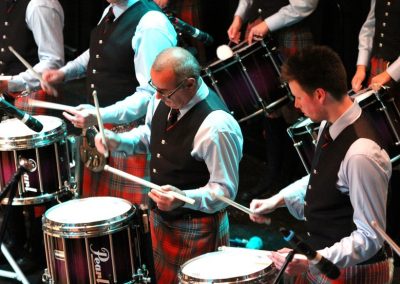 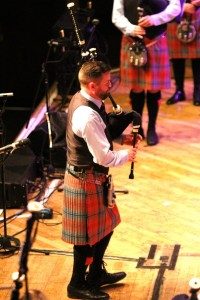 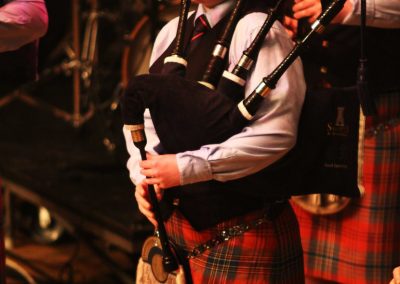 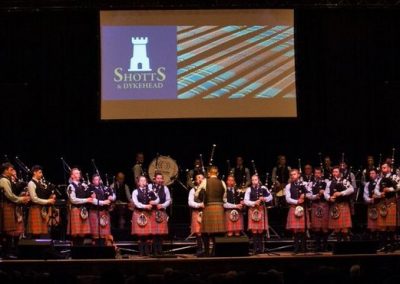 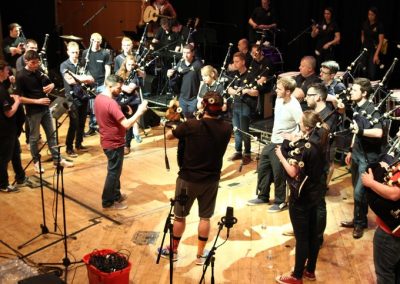