Shotts and Dykehead Caledonia introduced its first ever Junior Championship in 2014 as a way to support piping and drumming in the North Lanarkshire community, as well as to support youth piping and drumming more widely in Scotland. The band has a storied history of community engagement in North Lanarkshire, stemming from the band’s early connection to the old Shotts colliery, and its junior championship, organised in partnership with North Lanarkshire Council, is one of the important ways in which the band gives back to the area from which it comes. The belief in youth music development is equally important. More than a third of the band’s competing members are involved in the tuition of youngsters and juvenile bands across the whole of Scotland – from school bands and private tuition, to the National Youth Pipe Band of Scotland. The non-partisan teaching and support of youth by our members has certainly helped to foster enthusiasm for this junior contest from within the band, and as the contest will continue to be run on an annual basis, the enthusiasm of our individual members has been adopted as a philosophy of the band as a whole.

Entries are open to any young pipers, snare and tenor drummers who are aged 18 or under, and many different event categories provide opportunities for players of all levels to compete. Categories range from events for beginners (drum sticks and pad, and practice chanter) right through to a range of light music and piobaireachd events for more advanced players. The event is adjudicated by some of Scotland’s most successful adult solo competitors and top adjudicators. Our hope is that the event will be a supportive learning opportunity, both for experienced junior competitors, and young players who may be performing in solo competition for the very first time.

The 2019 junior competition was supported by the following organisations.

Images from around the Competition 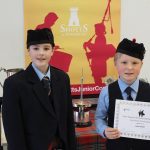 View the photo galleries from the competition.